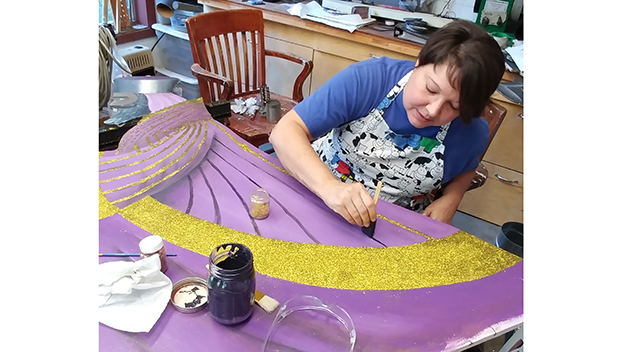 Jan Swoveland puts final touches on a display during the restoration of International Paper’s Christmas decorations. Swoveland is one of the daughters of Lanus Hammack who originally created the displays. (submitted)

NATCHEZ — Restoring a Natchez emblem of the holiday season is long, hard work, but that’s exactly what Burnley Cook and Anna Byrne are trying to do.

After nearly eight months of restoration, Cook has unveiled the International Paper Company’s Christmas decorations, which have retained their original depictions despite major reconstruction.

Though the drive-through display was first opened on Nov. 24, the grand opening this Friday will include a hayride tour of the decorations, hot cocoa and refreshments, face-painting and special guest Santa Claus.

The drive will open at 5:30 Friday evening after an opening message from Mayor Darryl Grennell and last until 8.

It’s been a long road to the grand opening, said Cook, who has worked tirelessly since February of this year to repair and repaint the late Lanus Hammack’s original artworks.

Hammack created a huge drive-through Christmas display in the 1950s. After rampant success through the 1960s, an energy crisis in 1972 ended the event, which had become a staple of the holiday season for a generation of Natchez residents.

Some of the original displays survived decades of neglect; some did not.

Two of Cook’s pieces are almost entirely original displays, he said, but the rest are recreations or restorations from photos.

It is the same rosy-cheeked Santas and elves, Cook said, just revived for a new generation.

Even after all the restoration, Cook spent a week perfecting the lights on each display, ensuring that shadows fell where he wanted them to and lamps lit the right character’s faces.

On the first day of display, Cook said he met people from across the state, Alabama, Texas and Louisiana who remembered the old IP decorations and just wanted to relive those memories.

The nostalgia the display stirs, Byrne said, is the reason she wanted to host the decorations at the visitor’s center.

“When I was little, my family went to IP, and it was a big thing,” Byrne said. “We went every year but it was always brand new. It was a memory-making event for our family, and that’s what I want for people to take home.”

Byrne said the grand opening on Friday was crafted for families to encourage the sense of togetherness she associates with the lights and smiling figures.

“It’s all about the nostalgia and bringing things back,” she said. “Remember what it was like. I think we’re getting away from that.”

Byrne said she felt that nostalgia when she first saw Cook’s restoration, and she thinks others would, too.

“All the decorations are the same ones I saw,” Byrne said. “There’s just something about it — like Christmas spirit in the air, like it’s about to snow.”

One day, Byrne said she wants 2017’s children to look back fondly on the lights and the feeling of the display, as she remembers the lights of the 1960s.