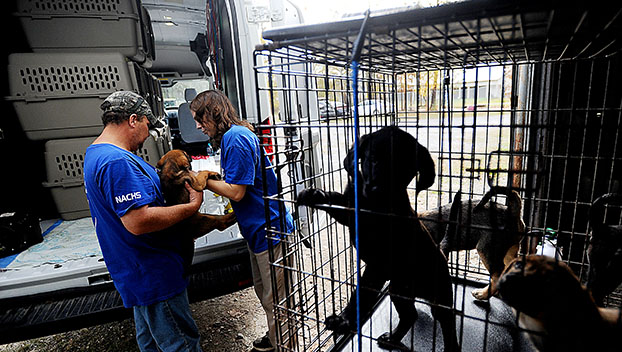 Larry Bolyer and Kathy Randall help load dogs onto a transport van Monday as part of the Natchez Transport Program that ships pets to other parts of the country where pets are in high demand. At top, a family of cats waits to be transported. (Ben Hillyer / The Natchez Democrat)

NATCHEZ — While Santa may deliver most of his gifts from the North Pole, a group of special presents will be coming by animal transport from the Natchez-Adams County Humane Society.

Monday morning, 75 dogs and cats were loaded onto two vans headed for new homes in other parts of the country. Many will likely find their way under Christmas trees in Pennsylvania and several Midwestern states, Natchez Transport Program founder Kathy Fitch said.

The animals were shipped as part of the Natchez Transport Program, a five-year effort to match an overabundance of local animals with cities and towns across the country sorely in need of pets.

In five years the Natchez Transport Program has shipped approximately 4,000 animals across the country.

“We started it five years ago with a transport of 40 animals sponsored by the ASPCA relocation initiative,” Fitch said.

Since then, the Natchez-Adams County Humane Society has developed its own transport network.

“We work with some very reputable national groups that assure humane care of the animals,” Fitch said.

Fitch said the idea is simple, but the rewards are great for the animals, their new owners and the Miss-Lou.

“What we do is we pair our pet overpopulation program with the need in other cities,” she said.

“You are helping some family that you will never meet, because they get the pet they have the love and home for, but you are also helping the community by making space that can be used by the shelters for more animals,” Fitch said.

Fitch said opening up space is important for the local shelters and the many rescue volunteers who provide foster homes for the animals.

“What we are trying to accomplish is to help shelters clear space so that they can take more animals,” Fitch said. “If the shelters and the rescuers don’t have space then they can’t help the local animals.”

“We are helping local spay and  neuter efforts because we are taking out all of these animals that could possibly reproduce in our community.” Fitch said. “We are sending them to no kill shelters where the first thing that will happen is that they will get spay and neuter surgery.”

In five years, the results have been dramatic.

“(Five years ago) we had an intake of over 800 puppies every year and we could only place 200 and something,” Fitch said.  “The other 600 were euthanized.”

With the help of the Natchez Transport Program the number of pets euthanized has decreased significantly.

“Right now NACHS enjoys an extremely low euthanasia rate. There is almost no euthanasia for lack of space,” Fitch said. “That is what we hoped to accomplish with the transport program.”

The program doesn’t come without a lot of hard work from Fitch, a few employees and many volunteers.

Approximately 4,000 volunteer hours are spent on the program each year, Fitch said.

The program subsists on donations directly to the transport program and is always in need of money and materials.

Quilts, fleece blankets, towels, dog food, cat food and non-clumping litter are needed. So too, are washers and dryers.

“We are in desperate need of a new hot water heater,” Fitch said.

Checks can be mailed to Natchez Transport Program, in care of the Natchez-Adams County Humane Society, P.O. Box 549, Natchez, MS 39121.

Without the help from a dedicated group of volunteers and foster home network, Fitch said the program would not be as successful as it is today.

“It helps our local shelter, it helps our community, it helps our animal rescuers,” Fitch said. “These animals have an opportunity and that is all that they want. This program helps that happen for them. The animals get a life.”

“It is truly a miracle,” she said.