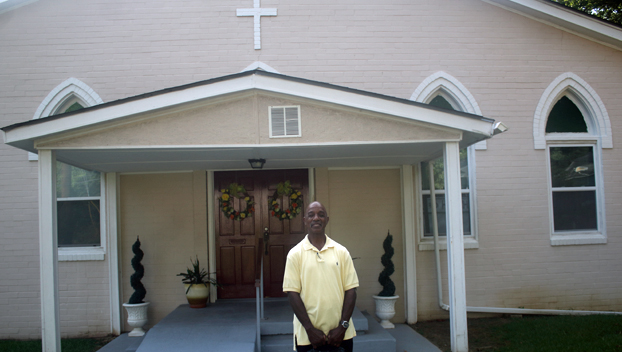 Michael Hoggatt has been the pastor at the Church of Christ for 21 years. Hoggatt said it has been a blessing to be able to be a minister in Natchez.

NATCHEZ — Michael Hoggatt said he has devoted his ministry as pastor of Church of Christ on Melrose Avenue in Natchez to helping elderly people, particularly those in nursing homes.

On Wednesday, Hoggatt was working at the church when The Dart landed in the neighborhood on Melrose Avenue.

Hoggatt, 64, said he first became a minister in the 1980s, and during that period, he visited nursing homes.

Shortly before becoming a minister, Hoggatt said he prayed the following prayer, “Lord whenever I come for you, I don’t know when it’s going to be, I want to make sure I come to be a service to these people in these nursing homes.”

Therefore, on the first Sunday of every month, Hoggatt said he and members of the Church of Christ visit the Glenburney Nursing Home where they sing songs and pray for the nursing home.

“We make sure we check them out,” Hoggatt said. “We make sure we do all we can to show them we are there. Some of them can’t go to our church services, so we bring the church to them. We sing songs and do prayers with them.”

Monday marked 21 years Hoggatt has been the minister at the Church of Christ on Melrose Avenue in Natchez.

During those 21 years, Hoggatt said he has baptized more than 200 people at the church that has approximately 40 members who regularly attend services, Bible classes and other services.

Hoggatt said he considers it an an honor to be a minister in Natchez.

“I thank God I grew up in Natchez. I made sure when I became a minister, I went back to my neighborhood,” Hoggatt said. “Some of the members are from the neighborhood I was growing up in. It does me all the good, because they know me from growing up, not even knowing for sure I was going to be a minister. I thank the Lord every day.”

NATCHEZ — A Natchez man faces charges on three counts of aggravated assault in connection to an Aug. 27 shooting... read more