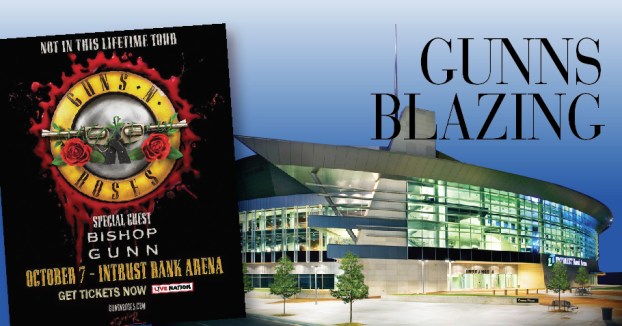 The announcement is the latest for the home-grown rock and soul band that will headline the Natchez Balloon Festival on Oct. 19.

Bishop Gunn has played a hot hand this year, including having opened seven European shows in March for Guns N Roses lead guitarist, Slash, during his “Living The Dream” solo tour.

The big coup, however, occurred in July when Bishop Gunn warmed up a crowd of 60,000 for legendary rockers, The Rolling Stones, as part of that band’s “No Filters” tour at Houston’s NRG Stadium.

The opportunity to open for Guns N Roses is a direct outgrowth of having toured with Slash in Europe, said Burne Sharp, drummer for Bishop Gunn.

“After we finished the tour, we got a call from Slash’s manager asking if we would be interested in having him manage us. Of course, we were! Red Light Management is one of the premier management agencies in the music business.”

Formed in Los Angeles in 1985, Guns N Roses hit the big time in 1987 with its debut album, “Appetite for Destruction.”

The album has sold 30 million copies and is the best-selling debut album of all time. During the band’s peak years, its members were as well known for their lives of wretched rock ’n’ roll excess as for their thunderous musical firepower.

After a two-decade hiatus, the band reformed in 2016 and embarked on its still ongoing “Not In This Lifetime” tour.

“It has been one hell of a year,” Sharp said. “Opening for two iconic bands from two completely different eras is amazing and extremely humbling.  We’re looking forward to 2020 when we hope to see another multi-country tour supporting a brand new Bishop Gunn record.”

Bishop Gunn Bassist Ben Lewis said he is thrilled with the opportunities the band has had in the past year.

“It’s surreal to think we’re really doing this,” Lewis said. “It feels like a torch is being passed along, and we’re the ones charged with taking it and carrying it forward. It’s a big responsibility, but one I think we’re more than ready to carry.”

Lead singer Travis McCready said he is encouraged by the band opening for such great rock ’n’ roll bands.

“To be opening for the two bands with the top-grossing concert tours this year kind of makes me feel like we might finally be making a little progress with this thing.”

NATCHEZ — The Judge George W. Armstrong Library director and board of trustees are discussing plans to remodel the... read more