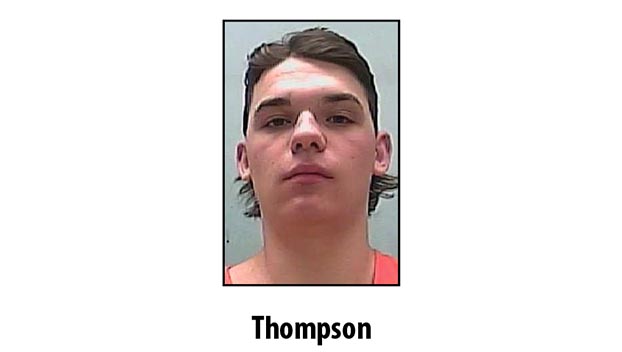 NATCHEZ — A suspect in an October 2019 Concordia Parish incident was arrested in Adams County Monday on warrants of false imprisonment and attempted auto theft after telling law enforcement to “come and get me,” Adams County Sheriff’s officials said.

Landon Paul Thompson had been on the run ever since October 2019 when he and another suspect allegedly ran his car into a woman’s vehicle in Concordia Parish, tried to open her car doors and began kicking and denting her vehicle, according to a witness, a Concordia Parish Sheriff’s Office incident report states.

Thompson and the other suspect fled the scene and warrants were later issued for their arrests.

“(Thompson) was told that he had warrants on him and told to turn himself in,” said Travis Patten, Adams County sheriff. “He told the deputy that he was not going to turn himself in and that they would have to do their job and catch him.”

On Monday, Patten said Adams County deputies received a tip that Thompson was at his grandmother’s house on Black Bear Road in Adams County.

“They eased up there and did what they do and were able to apprehend him at 118 Black Bear Road,” Patten said. “He knew about this but he just refused to turn himself in and the tip that came in today happened to be a good one so now he is in custody. He told the deputies, ‘Y’all are going to have to catch me, and they did that today.’”

NATCHEZ — While in the process of updating the stage lighting at the Natchez Little Theatre, the NLT Board of... read more