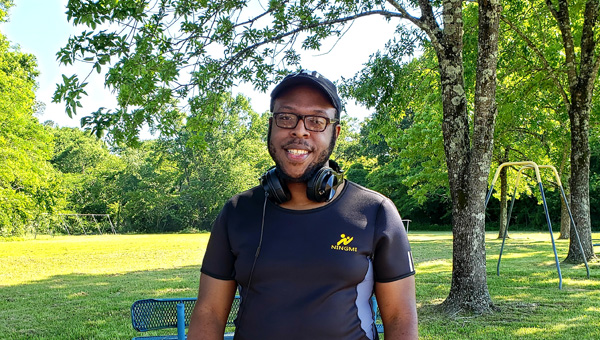 Damien Stewart was out walking the roads by Morgantown Middle School and getting a little fresh air when the dart landed in that area Wednesday afternoon. Stewart, originally from Natchez, recently moved back home from Little Rock, Arkansas and plans to start a new job as assistant band director at Natchez High School this fall. (Sabrina Robertson, The Natchez Democrat)

NATCHEZ — When Damien Stewart, a musician and native of Natchez, was offered a job at his former high school, it was an opportunity he “couldn’t pass up,” he said.

Stewart was walking the roads by Morgantown Middle School, getting a little fresh air and walking off his composer’s block when The Dart landed in that area Wednesday afternoon.

Stewart spent a lot of his time indoors during COVID-19 pandemic writing music, he said.

“I’ve been here with my parents since the virus started,” he said. “I wanted to be around my family when I heard the news.”

Stewart, who had been teaching music in Little Rock, Arkansas, recently traveled the Mississippi Blues Highway back home to be closer to his family and also to further his music career as the assistant band director at Natchez High School.

He played in the band through middle and high school, Stewart said.

He started playing the saxophone when he was a fifth-grader at Morgantown Middle School and then upgraded to a larger horn, baritone, when he entered the eighth grade, he said.

“That (instrument) took me all the way through college and I got a band scholarship with it,” Stewart said. “One of my cousins told me I needed to get off that ‘little man horn’ and get a ‘big man horn’ and so that’s what I did. … I learned that in my field of study it would help to know more than one instrument.”

Stewart said he thought he’d go to nursing school when he started college at Alcorn State University but his love for music took his studies and his career in a different direction.

“When I got to nursing school I said ‘this is not for me,’” he said. “I graduated from college and taught science for two years and then went back to get my master’s from Alcorn and it was in music. I’ve been teaching band for three years now.”

Stewart said he is excited to be working at Natchez High and is especially thrilled to be working with friends and mentors that he’d played with in his high school’s band.

“We just want to keep the traditions going that we had — that took us to college and through school. … I had mixed feelings at first about coming back here but when I got here I saw a lot of people I used to see and I wanted to make some kind of impact in my community.”

NATCHEZ — The City of Natchez has agreed to lease city-owned lands on the Mississippi River to Viking USA for... read more