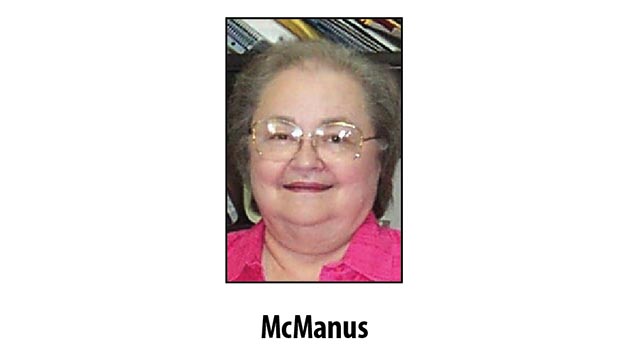 NATCHEZ — A former chairman of the nursing program at Alcorn State University in Natchez who taught there in various capacities for more than 25 years died Monday the age of 83.

Joyce Whitten McManus, RN, PhD, of Natchez, helped change the face of Alcorn’s nursing program throughout her tenure as a nursing instructor and later the Chair of the Baccalaureate Nursing Program, said the former Dean of Alcorn’s School of Nursing, Frances Henderson.

“Joyce McManus was a very brilliant nurse,” Henderson said. “… When we had a vacancy for someone to lead the Baccalaureate Nursing Program she was just finishing her PhD and feeling ambitious enough to give it a try. She did a wonderful job leading that department in the neighborhood of 15 or 16 years. She believed in excellence in nursing education, which was parallel to my own beliefs.

“We worked very hard with our students to get them prepared for the nursing licensure examination because they needed to pass the exam to graduate and become good nurses. Alcorn nurses were well known throughout the Miss-Lou and beyond as excellent nurses and during the time we worked together we had a pass-rate of 99%. She was very active in national and local nursing organizations and  was very devoted to Alcorn and served on several committees.”

To McManus’ daughter, Lori Barlow, McManus was known as “mom.” To Barlow’s daughter, Alexandra Barlow, she was known as “Gran.” To her students and faculty at Alcorn State, she was called “Dr. Mac,” Henderson said.

Regardless of whatever name she was called whether it was on campus or at home, those who knew her said they loved her.

“She was a sweet person and always so kind and considerate to me,” Henderson said. “Once I had surgery and one of the people standing beside my bed when I woke up was Dr. McManus. She was holding a tiny Christmas tree because I was in the hospital around the Christmas holidays and she had brought it for me. She was standing there smiling. She had such a sweet smile.”

Many of McManus’ students and teachers went on to accomplish great things, said Kim Hoover, who worked under McManus for approximately nine years.

Hoover, who is now the Dean of Nursing at the University of Mississippi Medical Center, said she learned valuable lessons from ‘Dr. Mac’ and ‘Dr. H.’ (Henderson).

“Dr. McManus hired me to teach in the baccalaureate program,” Hoover said. “Dr. Frances Henderson was dean, but Dr. McManus was my boss. Both taught me valuable lessons early on in my nursing education career.”

Dr. Mac ran a tight ship. Being accountable for all of those who entered into our nursing program was a responsibility she didn’t take lightly, but she always managed to keep a sense of humor. … Dr. McManus leaves a legacy of hundreds of nurses who graduated from her program, many of whom went on to become nursing leaders, educators and nurse practitioners.”

Kim Golmon, who was a secretary to McManus as she served as chair of the nursing program beginning in 1988 until she retired in 2004, said she would’ve put Alcorn’s nursing program up against any other school in the nation for as long as Dr. Mac was there.

“All of her students loved her. … I don’t know of anyone who didn’t,” Golmon said. “She was like a mother to me and I was involved in her family’s life. I watched both of her children grow into adults. She was a very good mentor and taught me a lot. … There were times when she and I were working into the night and three different security guards would walk by, meaning we had worked through three different shifts.”

Lori said when she was younger she and her brother, Mark McManus, knew that their mother spent a lot of time at school but at the time she didn’t realize how much education meant to her mother.

“As we’ve been working on her obituary and looking up articles about her I realized she had started her career as a secretary and at some point decided she could do so much more,” Lori said.

“She got her associate’s degree in nursing and then decided she needed to get a four-year degree. She did that and it still wasn’t enough. She strived to do better, so she went on to get her master’s degree. When she finally got her Ph.D. that was as far as she could go. I remember going to Ole Miss that day and how proud she was. She always preached to me that you have to be able to take care of yourself and I do the same for my daughter, too.”

Alexandra said she always admired her grandmother for her generous and loving spirit and also her selflessness.

“Gran was very kind-hearted and very loving, always. I know that is something a lot of people say about family, but it was very true for gran. Selflessness is a very hard quality to find in a person, but she is one of the very few who possesses that quality. She would do anything for you, even it if meant taking away from herself,” she said.

When McManus died, Alexandra said she was surprised to find her Bible had countless scriptures that were highlighted in it that were all about healing and perseverance.

McManus had survived breast cancer and later in life had an inflammatory disorder that caused her a great deal of pain but she never let her pain show, Alexandra said.

Sheri Wilkinson submitted this photo of her rose bud. If you have a photo you would like to submit to... read more