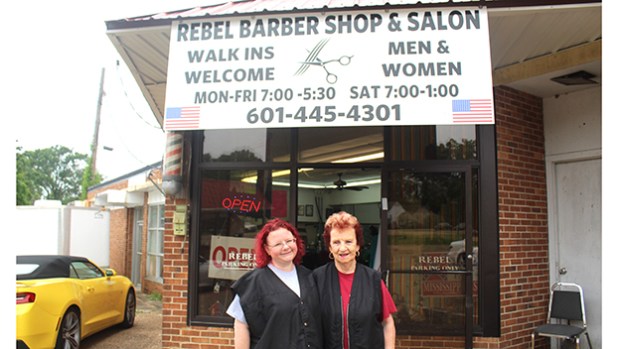 Granddaughter Mellisa Moreau and Rebel Barbershop Owner Jan Bertrand stand outside of the barbershop that is turning 65 years old. Bertrand worked there for 41 years and has owned it for about 38 of those years. (Hunter Cloud The Natchez Democrat) 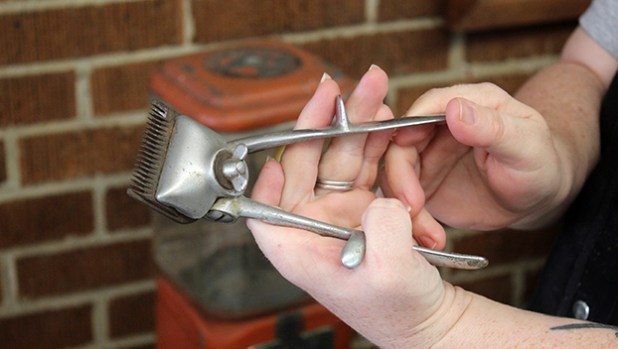 Mellisa Moreau holds hand held clippers that belonged to Vardaman Freeman before he died. It is kept in a cabinent in the barbershop along with his other relics. (Hunter Cloud The Natchez Democrat) 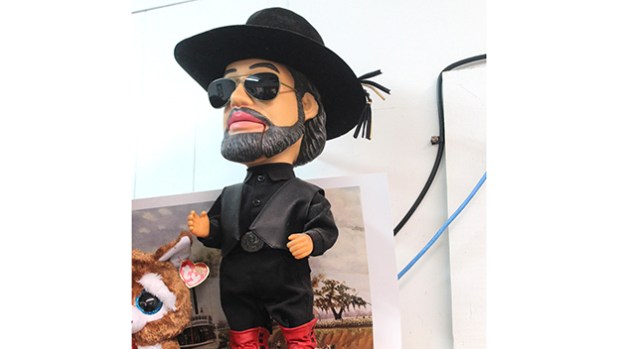 Hank Williams Jr. stands tall on a shelf in the barbershop. Bertrand said it was a gift from a customer.

NATCHEZ — Rebel Barbershop in Natchez will turn 65 years old on Monday and its current owner, Jan Bertrand, has worked there for 41 of those years.

Her granddaughter, Melissa Moreau, has worked in the business with her grandmother for the last 16 years. Bertrand said she isn’t sure what she will do when she decides to retire. Over the years, she has had regular customers and plans to serve them for another 10 years.

Vardaman Freeman owned the shop before his death in 1983. A wooden cabinet with glass doors holds several relics from his shop. Old handheld clippers, an old solid metal razor, and a straight edge razor are in the cabinet.

Underneath the cabinet is a boot-shining chair standing tall on a gray pedestal. An old Coca-Cola machine from the 1950s is tucked away in a corner, and country music rebel Hank Williams Jr. stands tall on a shelf. It was a gift from a customer, Bertrand said.

Not much has changed in the barbershop, besides the missing fish tank. Kids used to go over to it and peer into the glass at Oscars swimming around before the health department decided pets weren’t allowed in shops, she said.

“It’s crazy. Like you are going to walk a fish down the street and get it out in the shop,” Bertrand said.

Her most memorable moment is when a deer ran into the glass door last January.

“I thought the building had exploded,” she said.

Bertrand is a bit of a rebel herself. She wanted to be a barber since she was five years old. Her dad told her she could not be a barber because “women don’t do that.” She went to barber school in Lubbock, Texas, and her friend convinced her to move to Natchez.

COVID was a challenging year because so many people did not go out to get their hair cut. Since the world started returning to normal, her business has picked up to correct at-home haircuts.

While the haircuts change from year to year, the styles go around in circles, she said.

“Right now, we are doing a lot of real shortcuts,” Bertrand said. “For a while, it was longer (cuts). When I first got out of barber school, it was longer and it was hard to make a living.”