By Mississippi Center for Investigative Reporing 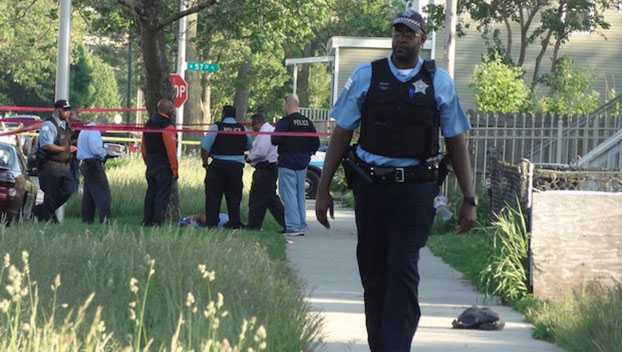 Chicago police as they investigated the fatal shooting of college student Malcom Stuckey, an innocent bystander slain during violence between rival gangs, in May 2014. Devlin Brown via Block Club Chicago

Malcolm Stuckey was pulling up in a burgundy Pontiac Grand Prix to his friend’s birthday party in Chicago’s once-prosperous Englewood neighborhood when a bullet fired from a gun, bought 840 miles away in Mississippi, tore into his brain.

His killing in 2014 placed the 19-year-old college student, college basketball player and museum janitor among 2,581 people shot in Chicago, which recorded 4,133 shootings in 2020. The city has counted more than 1,100 shootings already this year, according to the Chicago Tribune. 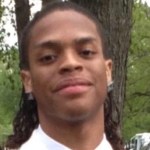 Suburban Chicago 19-year-old college student Malcolm Stuckey was an innocent bystander when he was killed by a gang member shooting a Smith & Wesson pistol he bought through an illegal sale in Mississippi. Courtesy of the Stuckey family

States such as Mississippi are supplying hundreds of firearms originally bought from licensed shops and, eventually, illegally transported to Chicago. What helps to feed that pipeline are Mississippi’s lax gun laws that allow almost anyone to sell a firearm to any other state resident, making it difficult to track those weapons or prevent them from being trafficked to locales outside the South.

The Mississippi man who might have sold a Chicagoan the .40-caliber Smith & Wesson pistol that killed Stuckey was a repeat gun-buyer at a Natchez pawn shop whose owner didn’t detect any red flags during several years worth of transactions between the two. It’s difficult to know most customers’ intentions, said Finley Hootsell, of Eagle Pawn.

Unless a background check turns up just cause not to sell someone a gun, there are few reasons to deny that purchase, said Hootsell.

“If there’s any question about any gun customer, there’s nothing that says I have to make that sale,” he said. “If you come in and you smell like a Cheech and Chong movie, you’re not getting the gun.”

An Innocent Caught in Gang Crossfire

That May 29, 2014, afternoon party was at 5722 S. LaSalle St., a two-story house divided into three apartments, situated a couple of blocks east of Interstate 94 and three miles straight west of the Museum of Science and Industry, where Stuckey worked. Vacant lots and rundown houses dotted that block in a neighborhood that whites had fled as Blacks started moving in decades ago.

Before Stuckey arrived for an afternoon birthday party for Lamenda Jones’ son, Dayvon Bennett, a member of the Black Disciples gang, already was on site. He was chatting up other party guests until he spotted two rival gang members at the house and took off.

“Don’t start no mess in my house,” Jones, who was cooking for that celebration, told Bennett, witnesses said in police interviews.

Bennett said he wasn’t planning to cause trouble: “I’m not on that.” 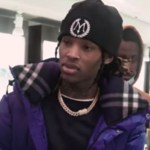 Rapper and Chicago gang member Dayvon “King Von” Bennett, was acquitted of murdering college student Malcom Stuckey in 2014 with a gun he’d bought in Mississippi; and was fatally shot in November 2020 in Atlanta. Publicity photos

He smiled at Jones, then left the house.

But Bennett, a 19-year-old rapper known as King Von, who had been in and out of jail since he was 16, didn’t let it go. He left the party, grabbed a friend and told a partygoer on the phone that he’d be back. Take the children inside, he said.

He returned to LaSalle Street with that .40-caliber Smith & Wesson purchased two months earlier in Mississippi by Jonathan Smalley, who’d amassed 32 guns in the Natchez area from 2009 to 2016. Chicago police recovered 11 of them, including Bennett’s, in their city, according to federal charges filed against Smalley in 2016.

Stuckey, who friends and relatives said wasn’t in a gang, had just arrived at the party when Bennett and fellow Black Disciple Michael Wade got out of a friend’s Oldsmobile Alero a block away. As Bennett and Wade cut through an alley behind the house, Stuckey stepped onto the sidewalk to smoke a cigar.

One of Bennett’s rivals looked up and saw Bennett and Wade approaching. He fled. Firing at him as he ran, Bennett chased that rival toward LaSalle Street, prosecutors told a jury. By the time Wade got to the front of the house, Stuckey was face down on the grass between the sidewalk and street, bleeding out. He died in his work uniform.

“Why you running?” Bennett had shouted while chasing his rivals, according to Wade’s police interviews. He and Wade kept firing; Wade hit one man in the foot. Bennett shot the other in the face, breaking his jaw. A few moments later the two were speeding away in the Alero.

Stuckey was declared dead at the scene at 6:09 p.m. The other two shooting victims survived.

“He was supposed to be on his way to see me,” said childhood friend Diante Willis, who lived down the street from Stuckey. “He had stopped answering his phone.”

One Shooter Went to Prison; the Other was Shot Dead

Wade and Bennett were arrested about two months later. Bennett refused to cooperate with police. Wade initially agreed to testify against him. (Almost a year after their arrests, and months after Bennett allegedly used the Smith & Wesson in a separate shooting, police said they found the weapon in the possession of another Chicago man.)

But Wade withdrew his promise to testify. He and Bennett were acquitted of murder, although Wade was convicted of aggravated battery with a firearm and sentenced to 28 years for the LaSalle Street shooting.

Bennett was shot to death in Atlanta in November 2020 after arguing with another rapper.

“My homie lost trial, he’ll be gone for awhile,” Bennett rapped in his song “The Code.” “If he give me up, then they letting him go.”

More than Any State, Mississippi Exports Guns Used in Crimes

Stuckey might have gone home after the LaSalle Street party if Smalley hadn’t bought that Smith & Wesson in Natchez.

Mississippi ranked dead last on the Gifford Law Center’s latest gun law scorecard, earning an F for its lack of gun precautions and restrictions that might pare gun deaths. The state has the second-highest gun death rate in the country, the center notes.

In Mississippi, Jonathan Smalley, now 34, legally bought dozens of guns from licensed shops, passing background checks each time. Where Smalley ran into trouble was mailing guns to buyers in Chicago, which, despite enacting some of the nation’s strongest anti-gun laws, has not managed to stanch the flow of firearms into that region.

Chicago police have seized about 7,000 “crime guns” every year since at least 2013, according to a University of Chicago study. That translates into about 250 guns for every 100,000 residents — six times that of New York City and 1.5 times that of Los Angeles.

The vast majority of those guns are bought legally at stores in suburban Chicago, neighboring Indiana and Mississippi, and end up being used in Chicago crimes. About 5% of the Windy City’s illegal guns come from the Magnolia State.

In 2019, 37% of the more than 15,000 guns recovered in Illinois, mostly after being used in crimes, were bought legally in the state, according to the federal Bureau of Alcohol, Tobacco, Firearms and Explosives. In contrast, 61% of the 4,000 or so guns recovered in Mississippi were bought in that state. Illinois’ population was 12.8 million and Mississippi’s was 2.9 million, according to the most recent Census estimates.

“If you’ve got a demand for it, someone’s going to try to find a way around it and make some money off of it,” said Kurt Thielhorn, special agent in charge of the ATF’s regional office in New Orleans, which covers Mississippi. “If you can buy a firearm for $300 or $400 and drive it to Chicago and double your money, you can understand why people would do that.”

Federal investigators never disclosed where Jonathan Smalley bought the Smith & Wesson pistol that killed Stuckey, only that it was purchased in Natchez on March 29, 2014. Chicago police haven’t said where Dayvon Bennett got the gun. He did, police said, fire it 12 times into a man — he survived — a couple of miles from the house where Stuckey died.

Police took the same pistol off another man in March 2015 in an unrelated arrest.

Smalley, who in 2018 was sentenced to more than five years in federal prison, bought at least some of his guns from the Natchez Pawn Shop that Finley Hootsell owned until opening up his current Natchez location, Eagle Pawn.

As a licensed gun-dealer, Hootsell is required to run background checks on potential buyers. He had no idea Smalley was involved in anything nefarious until ATF investigators later told him so.

“He would just buy guns one at a time over a length of time,” said Hootsell, who did not remember which guns he sold Smalley. “It’s not like he walked in and said, ‘Give me a dozen of those.’ That would have been a flag.”

Gun buyers can be as young as 18 years old if they’re accompanied by a parent, or if they’re under 21 and active or veteran military personnel. If the FBI completes background checks that gun-dealers order immediately, a customer can walk out of a shop with a gun within 15 minutes.

If someone wants to buy a gun from a guy on the street, no background check is required.

Compare that to Chicago, which has no gun stores in the city limits, or California, which has 107 gun-control laws, according to Boston University researchers.

Without stricter federal laws, few obstacles keep people from buying guns in other states and driving them hundreds of miles to Chicago or other cities. “It’s not even just a state problem,” said Kim Smith, director of programs at the University of Chicago crime lab. “Interstate travel is just a staple of American life.”

“This isn’t crack cocaine or meth; this is legal commerce”

The lack of prevention means investigators often are tracking guns that have already killed or injured. In Smalley’s case, for instance, investigators only connected the legally bought guns to Mississippi after they had been recovered following subsequent crimes.

“This isn’t crack cocaine or meth; this is legal commerce,” said Kristen de Tineo, the special agent in charge of ATF’s Chicago office. “The biggest challenge we have is identifying that point when legal commerce transitions to illegal commerce.”

This article is jointly published by the Mississippi Center for Investigative Reporting and Juvenile Justice Information Exchange, and supported by The Kendeda Fund. JJIE, a nonprofit news organization, is solely responsible for the content and editorially independent of its funders. Reporter Matt Krupnick is at matt@mattkrupnick.com.