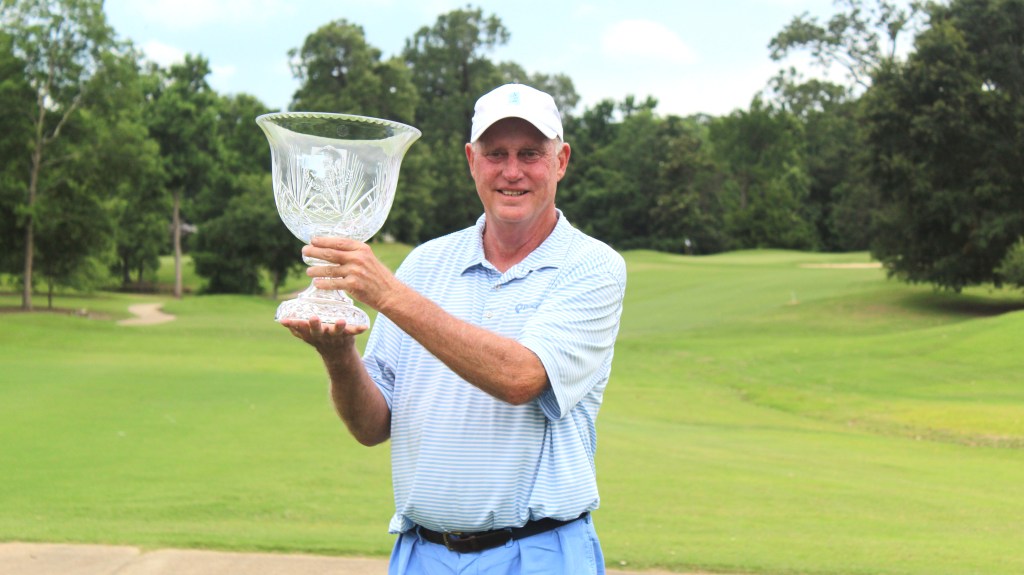 Robert Sanford holds the Natchez Open trophy he won with his 4 under par performance. He won the senior amateur division. (Hunter Cloud The Natchez Democrat)

The Natchez Open Senior amateur championship was determined in the final three holes of Sunday’s round. Robert Sanford was down by a stroke to Pete Powell when they neared the clubhouse.

Then on holes seven, eight, and nine, Sanford managed to mount a comeback. He is a resident of Meridian and said when he is in Natchez he typically plays with Powell.

“Pete missed a couple of putts coming in and I birdied eight and nine,” Sanford said. “It started to swing. It is always a pleasure to play with Pete. He is such a class guy. The eight-hole (17) was the turning point. He boogied and I birdied, that is a two-stroke swing. I think we were tied going into that hole.”

To cap off his championship round, Sanford birdied the final hole to finish four under par and win the senior amateur division by three strokes. He said on the course he was able to keep his composure throughout the final round.

Somehow the rain held off from raining out the tournament on the last day. Lightning struck the area about 3.5 miles south of the course and if it had been any closer course superintendent would have blown the air horn to suspend play.

It set up a finish for the low amateur spot perfectly as cloudy skies turned to blue. Earlier in the day, Eric Brown woke up as the low amateur in the Natchez Open. He had a chance to extend his lead on the final day with four straight birdies on holes seven, eight, nine and 10. Then on the back nine of the course, his play went “downhill.”

On hole 13, Brown had a double bogey. It started off a rough stretch of holes. The par three had given him trouble all weekend long, he said. At this point in the round, he said he knew he was in the lead and the pressure started to grow.

“It made me feel like I was not quite as committed to what I was trying to do and knowing where my shot was going to go ahead of time,” Brown said. “That kind of created some loose swings. It is a different type of pressure than when you are just out and trying to shoot a personal low round. Tournament golf is a lot different than normal golf.”

Brown had worked his way to nine under and it slipped from his grasp with an afternoon group teeing off after him. This group was within range to catch him, and they did. Carter Nicholson and Zachary Smith birdied the final hole to tie at six-under-par.

The two decided to forgo a playoff hole and split the money for low amateur. Inflight 1, beneath Smith and Nicholson, John Avila came in first place with 12 over par. Brown left the course before those final groups finished playing.

“It is weird because I was in first and usually you play last,” Brown said before Nicholson and Smith finished playing. “It is a little stressful, but there is nothing I can really do about it. It is all out of my control. If someone catches me or passes me then oh well.”