VIDALIA — Sema’J Hayes led Vidalia High School with 18 points and Courtlyn Brooks added 16 points as the Vikings pulled away in the second half for a 60-35 win over the Beekman Charter School Tigers last Friday night in an LHSAA District 2-2A game.

Trenton Davis contributed with 13 points for Vidalia, which finally won its first district game of the season after a tough, one-point overtime loss to district foe General Trass High School on Tuesday, Jan. 25 which, at the time, kept the Vikings winless in the district standings.

The Vikings jumped out of the gate early and also made it difficult for Beekman Charter to get any shots to fall. By the time the first quarter was over, the Vikings led the Tigers 16-3. But the second quarter wasn’t so kind to the home team as Beekman Charter outscored Vidalia 13-8 to go into halftime down 24-16.

However, Vidalia recovered in a big way when the second half started. The Vikings’ offense was back to where it was in the first quarter, as was their defense. The result was a 21-9 advantage for a 45-25 advantage. The Vikings would not let up in the fourth quarter as they outscored the Tigers 15-10 for the 25-point victory.

The Vikings improved to 8-11 overall and 1-3 in district play. The traveled to Delhi, La. to take on district opponent Delhi Charter School Tuesday at 7:30 p.m.

VIDALIA — Kirstin Grove led the Vidalia High School Lady Vikings with 10 points, but the Beekman Charter School Lady Tigers had too much firepower to keep up with as they defeated the Lady Vikings 61-17 last Friday night in LHSAA District 2-2A action.

Beekman Charter was led by R. McCool and L. Williams with 13 points apiece. The Lady Tigers led Vidalia 9-1 after one quarter of play before putting the game completely out of reach with a 25-3 advantage in the second quarter for a 34-4 halftime lead.

“Beekman Charter, I like the girls on the team. They were a very pleasant team to play,” Lady Vikings head coach Tema Larry said. “I like the chemistry I saw from them. They work together as a team.”

The Lady Tigers outscored the Lady Vikings 10-4 in the third quarter and 17-9 in the fourth quarter. Even though the Lady Vikings have yet to crack the win column this season, Larry said she still believes in her players and that next year is going to be different.

“We’re a starter team. The girls are still learning to gel together,” Larry said. “It seems like every other game we’re dealing with injuries. Two of our starters are out with leg injuries. But our girls are not giving up. That determination alone will get us to where we need to be. Even if it’s next season.”

Larry added that she is a positive person and that she will continue to stick by her players and that the she is building for the future of the Lady Vikings’ program.

“They want it. I still believe in them. I already know what I need to work on for next year,” Larry said. “We’ve always got to stay positive.”

The Lady Vikings fell to 0-16 overall and 0-4 in District 2-2A. They played at district foe Delhi Charter School Tuesday at 6 p.m. 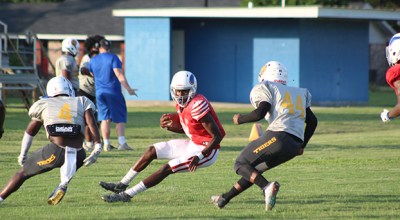 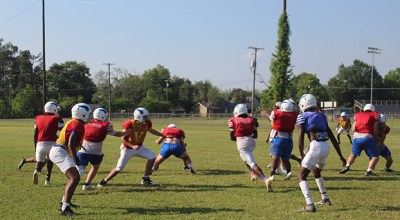