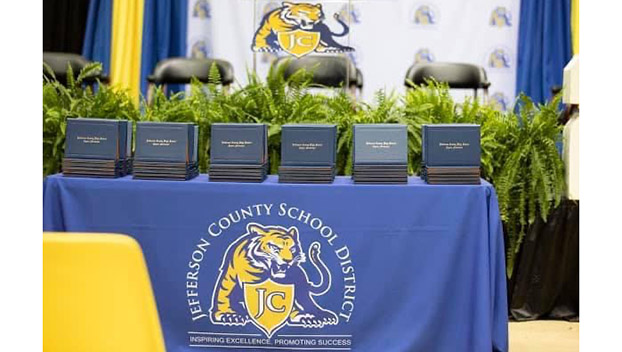 FAYETTE—According to a report released by the Mississippi Department of Education Thursday, Jefferson County School District achieved a graduation rate of 96.1 percent, the fourth-highest graduation rate of all public school systems in the state.

The state has a whole achieved its highest ever graduation rate this year, as did Jefferson County.

Jefferson County’s graduation rate increased from 89.9 percent the prior year to 96.1 percent, exceeding the state average of 88.4 percent. National Center for Education Statistics (NCES) will release the 2019-20 national graduation rate later this year.

Amite’s graduation rate fell from 79.7 percent and Franklin’s has not changed.

“We are thrilled to know that our graduation rate is the fourth highest in the state, and we have the third-highest graduation rate for students with disabilities,” said Adrian Hammitte, superintendent of education in Jefferson County. “As the educational leader of our school district, I could not be prouder of the collaborative work taking place to ensure that every child graduates from Jefferson County School District. I continue to be proud of our team in the Special Services Department under the leadership of Dr. Cartrell Hammitte.  Their commitment to our students with disabilities is unmatched and evident in our graduation rate. While we celebrate the increased graduation rate, we remain committed to getting 100 percent of our students across the stage.”

“Even when taking into account the pandemic’s effects on instruction and assessments, more Mississippi students are continuing the upward trend of staying in school and earning their diplomas,” said Dr. Carey Wright, state superintendent of education. “One of MDE’s goals is for every student to graduate from high school ready for college and career, and we will continue the essential work to support educators, families and students to achieve success.”