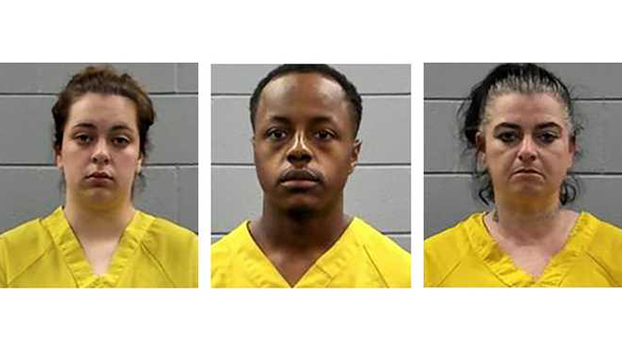 NATCHEZ — Three people are now in Rankin County Sheriff’s Office custody in connection with a kidnapping incident, and two of the suspects were apprehended in Adams County.

Rankin County Sheriff Bryan Bailey said in a news release that the kidnapping investigation began about 10 a.m. Sunday when his office received a call from the Flowood Police Department saying an injured man walked into their lobby and reported he had been assaulted, tied up and held at gunpoint in the county.

The victim told deputies that he was held against his will for about three hours before kidnappers untied him and allowed him to leave. The victim’s phone and other items were taken, Bailey said in a news release. The victim identified the suspects as Cortez Adams, 23, and Laken Lowery, 22. He said Lowery’s mother, 47-year-old Tina Lowery, was also present during the kidnapping and assault, according to Bailey.

The Special Operation Group at ACSO reached out to the suspects and were able to make contact with them by phone. Both were taken into custody Sunday night at approximately 7:20 p.m. and have been transported back to Rankin County Sheriff’s Office on kidnapping charges.

Tina Lowery was arrested in Rankin County and charged with accessory to kidnapping.

Adams County Sheriff Travis Patten said Cortez Adams is from Adams County and has family in the area.

“Networking in law enforcement is invaluable and when done right, it takes the jurisdictional boundaries off of law enforcement to bring swift justice for victims,” Patten states in a news release.