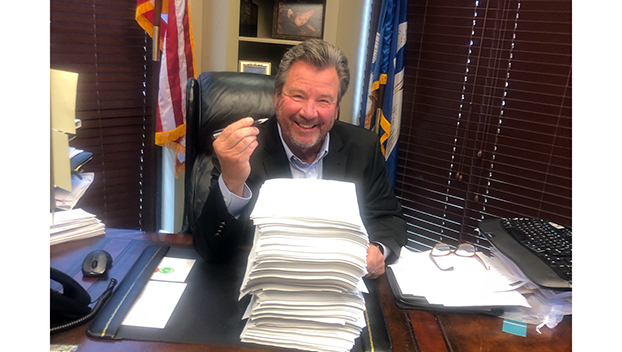 Vidalia Mayor Buz Craft sits behind a stack of Vidalia utility rebate checks he is prepared to sign and start mailing out to residents. (Submitted Photo)

VIDALIA, La. — It’s almost hard to see Vidalia Mayor Buz Craft behind the giant pile of checks he is signing just before Thanksgiving. His hand might be a little sore before he is finished signing them, but it’s a good thing for Vidalia utility customers.

A total of $2.8 million is being rebated back to those customers. This sum comes from royalties generated by the Sydney A. Murray Jr. Hydroelectric Station, a perk the town has received since the plant went online in 1990. Governing officials have the option to refund up to 50% of the customers’ utility bills.

A new ordinance passed by the Board of Aldermen at their last board meeting sets parameters on who can receive the rebate if they owe money on their utility bill. Some will receive a reduced balance if they owe anything and others will get a check in the mail. The amount varies depending on their energy usage.

Since 2016, the town has paid back more than $7.5 million to residents and businesses through hydroelectric royalty rebates. Last year, rebates totaled about $2.5 million.

Due to the low Mississippi River levels seen in the past few months, the town has seen a decrease in hydroelectric royalty revenue by about 75% due to a drop in productivity at the hydroelectric station. However, this decrease hasn’t had an impact on the utility rebates, Craft said. The river level dropped below the 10-foot stage last month and is now rising back up to the 19-foot stage.