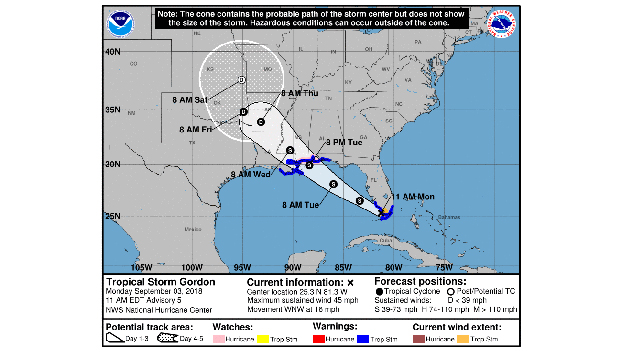 MIAMI (AP) — Residents in parts of South Florida, Mississippi, and Louisiana are being warned to prepare for tropical storm-force winds with the onset of Tropical Storm Gordon.

A hurricane watch has been issued for portions of the central U.S. Gulf Coast as Tropical Storm Gordon approaches. A storm surge warning has been issued from Shell Beach, Louisiana, to the Mississippi-Alabama border.

The storm is expected to cross from southwest Florida into the Gulf Coast later Monday afternoon.

Flooding was also a high risk for the areas affected by the storm, including portions of southeast Louisiana north of Interstate 10 and southwest Mississippi west of Interstate 55.

The storm was lashing South Florida on Monday with high winds and heavy rains as it moved west-northwest at 16 mph. The storm was expected to reach coastal Mississippi and Louisiana by late Tuesday and move inland over the lower Mississippi Valley on Wednesday.

The National Hurricane Center in Miami said in its 1o a.m. advisory that the storm was centered 60 miles west-northwest of Key Largo and 50 miles south-southeast of Marco Island.

A hurricane watch — meaning that hurricane conditions are possible — was put into effect for the area stretching from the mouth of the Pearl River in Mississippi to the Alabama-Florida border.

The Dart: Couple takes the back roads