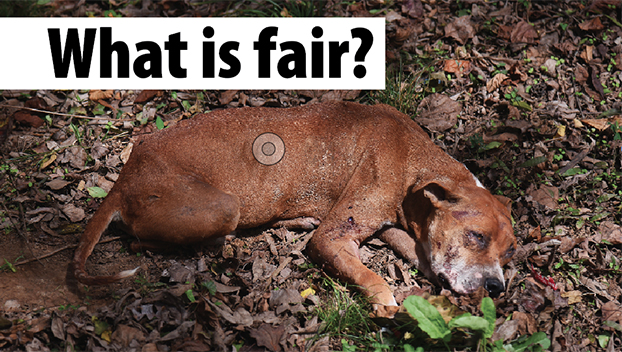 In November 2017, Adams County Sheriff ’s Office deputies responded to a call about a dogfighting farm in the Cranfield community. More than 50 injured and starving dogs and the bones of dozens of deceased animals were found. (file photo)

NATCHEZ — The judgments in two recent criminal animal cases in Adams County have prompted a fury of responses on local social media.

Adams County Sheriff Travis Patten said his office had received several questions from people on the issue following the sentences in the Tommie Queen dogfighting trial in which Queen was sentenced to 9 years in prison and the Landon Turner animal cruelty case in which Turner was sentenced to 30 days in jail.

Many concerns center on the disparity in sentencing in the two cases.

Having listened to the questions and concerns, Patten said he believes many people are confused because they do not understand the differences in the state laws under which the two men were charged and sentenced.

Queen’s trial was the culmination of a case that began on Nov. 6, 2017, when Adams County Sheriff ’s Office deputies responded to a call about a dogfighting farm on Queen’s property at 29 and 1/2 Miracle Road in the Cranfield community.

More than 50 injured and starving dogs and the bones of dozens of deceased animals were found, officials said.

As a result of the case and media coverage, the Mississippi Legislature enacted a stiffer dogfighting bill introduced by Sen. Bob Dearing, D-Natchez, in 2018.

Queen, however, was charged under the old guidelines because the crimes were committed before the law changed.

On Nov. 12, Landon Turner, 24, of Denham Springs, Louisiana, pleaded guilty in Adams County Justice Court to two charges of animal cruelty, in which he admitted to shooting and killing two dogs and throwing their bodies into a ditch in the Kingston Community on Dec. 22, 2018.

After hearing the case and accepting Turner’s guilty plea, Adams County Justice Court Judge Tony Heidelberg sentenced Turner to three months in jail each for shooting the two dogs. Heidelberg suspended two months on each charge for a total of 60 days in jail to run concurrently, which means Turner will actually serve 30 days in jail over a 90-day period on his days off of work.

Patten said the complaints about the sentencing reflect a misunderstanding among people of the state’s laws concerning dogfighting, which is a felony, and cruelty to animals, which is a misdemeanor that carries a maximum penalty of $1,000 and/or six months in jail.

“Even though the dogs were killed,” Patten said of Turner’s case, “this was the most he could be charged with. Aggravated cruelty can only be charged if the animal is mutilated, maimed, starved or disfigured. This charge has no minimum penalty. Maximum penalty is $2,500 and/or six months. This is only upgraded to a felony if there is a subsequent offense committed with a 5-year period.”

Adams County Sheriff’s Office Chief Deputy Jerry Brown said he had also heard several objections from people in the community questioning the disparities in the sentences.

“On social media, a lot of people were complaining,” Brown said. “Some of them felt it was a racial issue (Queen is black, and Turner is white). We don’t have anything to do with the sentencing but just to explain it to people a little bit better, we put the animal cruelty laws, both laws out there (on social media), as well as the dogfighting laws, to try to clear the air up out there and let these folks know that that was the difference.”

Patten said Queen was convicted on three counts of dogfighting, which are felony crimes that carry a minimum penalty of $1,000 and/or 1 year for each charge. The maximum penalty is $10,000 and/or 10 years.

Blackwell said Queen was indicted under Section 97-41-19 of the Mississippi Code, which deals with dogfighting and states that if any person owns or trains a dog for participation in a dogfight, for the first offense, it is a felony.

“When Tommie Queen was charged, the maximum penalty for that was three years and as we all know last year, Sen. Bob Dearing got that law amended,” Blackwell said, “so the penalty now is up to five years. It was three when Tommie was charged. It is now five.”

Therefore, Blackwell said she gave Queen the maximum prison time on each of the three counts after a jury of his peers convicted him in court.

As to the apparent disparity in Queen’s and Turner’s sentences, Blackwell notes that under section 97-41-16 of the Mississippi Code, animal cruelty is a misdemeanor.

“It (97-41-16) sets forth different acts, what constitutes simple cruelty, which is like if you wound an animal or deprive it of food or water,” Blackwell said, “then that would be simple cruelty, which would be a misdemeanor, which carries up to six months in jail. That statute also provides that if anybody intentionally tortures, mutilates, maims, starves or disfigures a dog or cat, then they can be charged with what is referred to as aggravated cruelty.”

Aggravated cruelty to a dog or cat, Blackwell said, carries a maximum sentence of six months upon a first offense conviction.

“For a second or subsequent offense of aggravated cruelty to a dog or cat within a period of five years, it is a felony and the penalty for that is one to five years,” Blackwell said.

After hearing the case and accepting Turner’s guilty plea in Adams County Justice Court, Heidelberg said his sentencing of Turner was the maximum allowed under state law for simple animal cruelty charges.

“After this person entered a guilty plea, and I listened to the victims who actually gave their thoughts and their feelings about this particular matter . . . the court took that under consideration, and the court decided that the 30 days jail plus court costs were reasonable under the circumstances,” Heidelberg said. “Some may have an issue with it. I also took the position that I would rather have people with jobs and working … as opposed to someone getting fired, so he has certain days he is at work and certain days he is off. For every day that he is not working, and we have the schedule, he will be in jail until his time is served.”

Heidelberg said in sentencing Turner, he also took into consideration that Turner admitted his guilt and showed remorse and the victims’ (the dogs’ owners) statements in court.

“I gave him (Turner) six months on both cases, and I suspended the time after hearing the testimony from all involved and still required him to do 30 days and 60 hours of community service as well,” Heidelberg said. “The person was wrong. He came in and admitted he was wrong. He was extremely apologetic for it, plus my victims had their chance to speak, and not one person in their speaking requested to me that he get jail time.”

Several animal rights advocates and law enforcement authorities said they believe the state’s animal cruelty laws should be strengthened, as evidenced by state laws that resulted in the Queen and Turner sentences.

Brown said he believes the state’s animal cruelty laws should be strengthened.

“Shooting a dog or cat is a misdemeanor, but if you poison them it is a felony,” Brown said. “However, that’s a more horrific death by poisoning, I understand that, but either way you’re killing the animal.”

At the time, Mississippi Today reported that the bill was met with opposition from the Mississippi Farm Bureau Federation.

“When Hill and other lawmakers brought forth similar bills in the past, they were met with a powerful foe: the Mississippi Farm Bureau Federation,” Mississippi Today reported Jan. 24, 2017. “Farm Bureau spent around $30,000 on lobbying efforts in the 2015 legislative session and $41,000 in the 2014 legislative session, according to lobbyist reports.”

Mississippi Today reported that the Farm Bureau believed at the time that the current law was sufficient.

“‘Farm Bureau would like to see the current law enforced to its fullest extent before adding additional laws,’ a statement from the group read,” Mississippi Today reported. “In current state law, abuse of livestock, defined as ‘killing, maiming or wounding,’ is a first-time felony offense punishable by 1 to 5 years in prison and a fine between $1,500 to $10,000.”

Mississippi Farm Bureau Federation did not immediately respond Friday to a request for comment on this story.

“The law and penalties for Simple Animal Cruelty are far from strong enough,” Ewing wrote in a social media post last week explaining the disparities in the sentences. “That can only be changed by the lawmakers. The law and penalties for Felony Dog Fighting were strengthened in 2018 because of Queen’s case. He stood trial under the older, weaker law. The same arrest now would carry a much stiffer sentence for each count of felony dogfighting under the new law. If you are not satisfied with the animal laws, you should contact your state senators and find out how you can help strengthen them.”