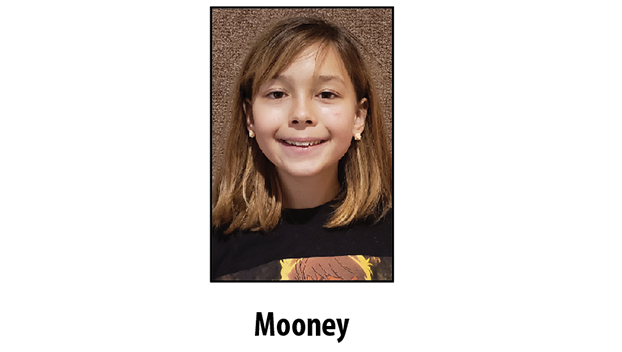 “I’m very proud of her. I knew she could do a lot of things but I didn’t realize how much until hearing that she won,” said Mooney’s mother, Danna. “She worked on it and talked about it for a few days and spent one Sunday afternoon writing. She had all of these ideas in her mind. … She also had to do some research just to get her story straight and learned a lot about what children had experienced at sea.”

In her essay, Mooney described the journey to the last detail, imagining she had fallen ill on the voyage and wished she had packed more citrus fruit for scurvy and peppermint for seasickness.

She also stated she missed her dog, Toby, and thought before leaving she would be able to return home to England one day to retrieve him.

“I looked up things that I could put into the story,” she said. “I looked at little towns they left behind and found out most of them thought they would be going back.”

Mooney is among the first class of students at ACCS to enter the Daughters of the American Revolution essay contest and will be traveling to Jackson for an award ceremony next month.

She also placed first at her school in the elementary spelling bee and participated in the district bee this school year.

Mooney said she naturally enjoys writing and tried her hand at writing short stories and even started writing a children’s book when she was 6 years old.

At the age of three, she started acting in church plays and joined the Natchez Little Theatre and ACCS drama team in recent years.

She also plays basketball, softball and plans to join both the Rebelettes dance line and cheerleading team once she starts high school.

“I’m not sure which one I like more, dancing or cheer,” she said. “I guess I will find out when I get on the teams.”

PARCHMAN (AP) — An inmate at a Mississippi prison that was a focus of recent deadly unrest was found hanging... read more